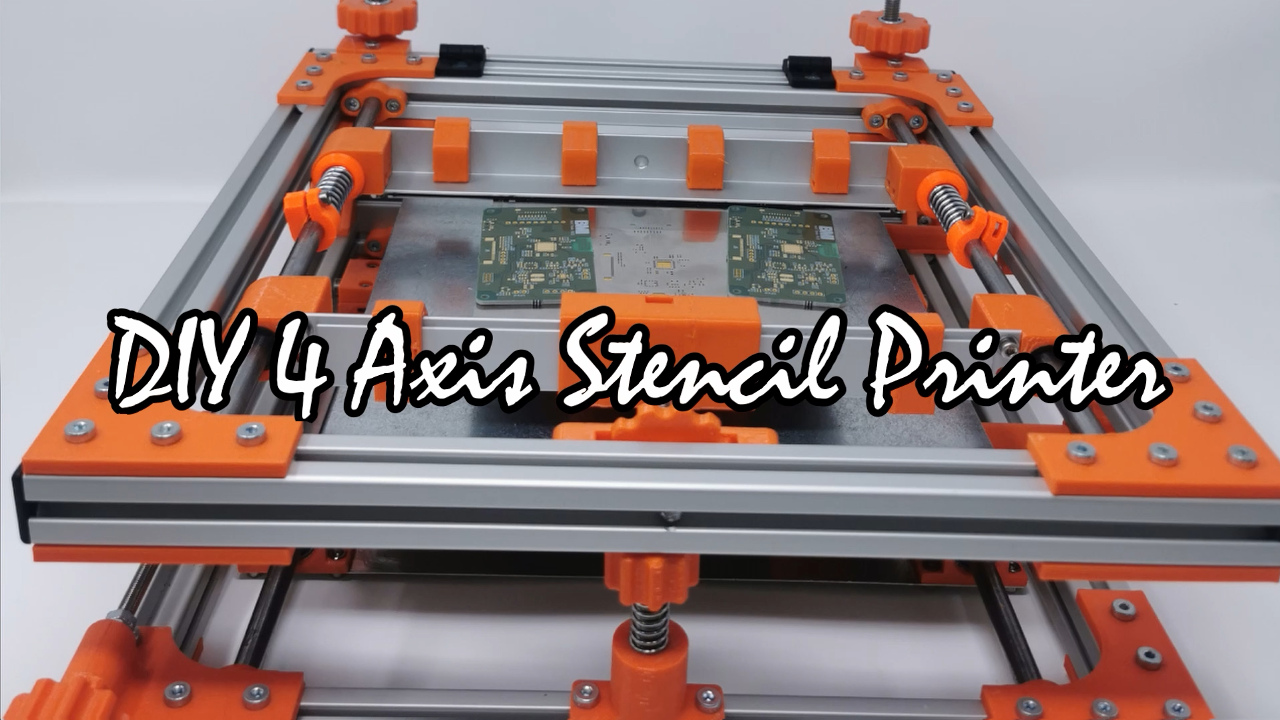 If you prototype a lot of PCBs you may have wished for a stencil printer to speed up your process and get repeatable results. You may find the existing printers quite expensive ( > 2000€). Therefore I decided to take matters in my own hands and design and build a 4-axis stencil printer myself. In the next paragraph you’ll find a brief description of the outcome.This post describes my 3D printed 4-axis pcb stencil printer

Alex (see comments) made me aware that there could be an additional feature. When lifting ip the upper frame the first few millimeters should reassemble a linear movement so I’ve decided to implement this via an addon. So an eccenter it is.

The basic idea is very simple and is heavily relying on well established XYZ-tables. The x- and y-axis move the PCB relative to the stencil while the z-axis adjust the gap between those two. To adjust the angular alignment of PCB and stencil an rotational axis is necessary. It rotates the PCB underneath the stencil on the xy-plane. Finally there has to be a clamping and tension mechanism in order to securely hold the stencil in place.

To keep the cost of the printer reasonable widely available parts have to be used. As in 3D printers 8 mm rods and linear bearings seem the obvious choice for the stencil printer, too. Axis movement is achieved with M5 threaded rods for fine control due to its 0.8 mm pitch. The whole design is basically split in two parts. The lower part features the x and y axis as well as the planar rotation axis alpha with the mounting bed for the PCB. The upper part is responsible for the stencil clamping and tension mechanism. For convenience it features a hinge to flip the frame up for easy and fast stencil mounting and pcb placement and removal. The connection between those two parts is designed with spring loaded 8 mm rods for z axis adjustments. Usually the z axis is aligned once in a way that the stencil is sitting flush with the pcb surface and then secured and never touched again. Therefore a low-tech solution is reasonable here. Another feature commercial stencil printers sometimes have is a magnetic bed with standoffs for easy pcb mounting which can easily be implemented with a sheet of galvanised steel and 6 mm cylindrical neodym magnets for the standoffs. The outcome of the considerations above can be seen in the following render shots of the final design.

The basic components can be summarised as follows:

In the following paragraphs some of the components and design choices are described in more depth.

As it turns out one of the most expensive (and in this case overkill) parts is the slewing ring to rotate the mounting table with its magnetic bed. These, at least with tolerable play, easily cost more than the other components together. Instead of using a slewing ring I settled on another solution.

The design basically consists of two concentric rings forming a groove for four radial bearings (605zz) to run in. The bearings are mounted on the bottom plate. The outer ring, mounted on the top aluminium plate, is equipped with a partial gear. On the bottom plate a worm gear is held on a M5 threaded rod which provides some flexibility and therefore puts a slight preload on the gears. As it turns out the design works really well and is very inexpensive by utilising only four radial bearings.

Another critical feature is the clamping mechanism. If you order your PCBs at your manufacturer of choice you order a stencil along with them. Usually the stencil is a laser cut stainless stell sheet with a thickness of approx. 100 um. These stencils can be prone to kinking. Therefore the clamping mechanism should be design in a way to firmly hold the stencil while avoiding damage. The design of the clamps is very basic. Each of the two clamps can move independently along two 8 mm rails on linear bearings. The clamp itself consists of two linear aluminium profiles in L-shape to provide some rigidity. While the upper profile is mounted to the bearing carriers on each side the bottom profile is mounted to the upper profile with M3 screws and nuts alongside nut holders for easy tightening. the upper clamp holds a strip of quite tacky SBR rubber to enforce stiction. The lower clamping assembly is attached to a M5 threaded rod which is also attached to the frame and a wheel with a nut to tighten the clamping mechanism once the stencil is clamped firmly. The upper clamping assembly is then held against two springs and tighteners on the rails. So the stencil will not be damaged as easily due to the springs absorbing some of the force when overloaded.

Below there is a video demo of the handling. If you are interested in building one yourself you’ll find the files on thingiverse.

I’ll add a build log as well as the full parts list with plans in the near future.